Trump's Stop The Steal's Wild Protest Fizzles Out In L.A. 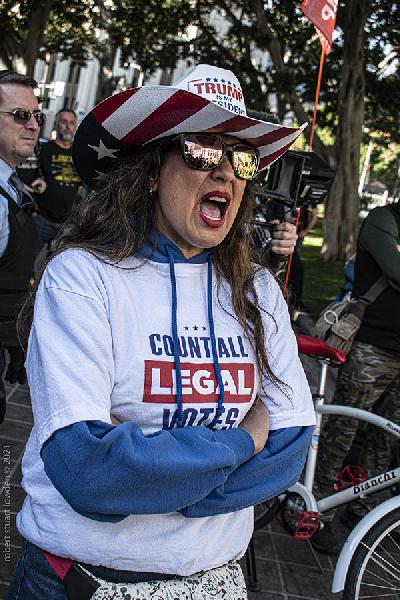 January 6th , 2021 will be another day that will live in infamy in America's and the world's memory.

Last Wednesday The United States Congress was due to ratify Joseph Bidens and Kamala Harrises electoral college votes, making them President and Vice President of these United States.

A call had gone out From Donald J. Trump for people to gather in Washington and elsewhere in the country to protest for the apocryphal charge that widespread voter fraud had occurred in this election and needed to be dealt with.

After a speech by Trump, thousands of people stormed the Capitol.

Here in the Hinterlands of Los Angeles a simultaneous “Wild Protest “ started at 9 am on the back lawn of L.A's City Hall.

There was almost no police presence for the first two hours. A dozen or so LAPD were stationed here and there in groups of two or three.

The crowd in Los Angeles numbered in the low hundreds.

There was a small amount of violence towards the end of the rally.

I took these photos of the Los Angeles protest as a psychograph of a political sect in it's nadir. It is yet to be seen whether their numbers will fade with Trumps exit from the presidency.

To date, 59 of the election fraud cases the Trump campaign have brought before the U.S. courts have failed due to lack of evidence. 60 lawsuits have been filed in 6 states overall at this date.

Mr. Trump called for a “ Wild Protest “” To occur at The U.S. Capitol on Jan 6th. These rallys occurred across the U.S.

Ours started at 9 am.

These shots were taken several hours before the Capitol Riots broke out.

The photos are those of true believers, who are suspicious of any media that doesn't conform and amplify what their entitled president states is the truth.

QANON and it's crazy aura were woven into this crowd, putting smug smiles and heroic gazes on these faces so we can all be secretly worried that there is something to their demagogues twitter rantings.

These are photos of the convinced patriots who have no need for evidence when popular digitized hearsay will do just as well if not better !

The crowd was mostly peaceful, however I was hassled by some self appointed patriots dressed in bullet proof vests, brawling gloves and fancy sunglasses. A fervid cry went up from some acolyte citing my nonexistent membership in Black Lives Matter , Antifa and my supposed citizenship of a foreign country !

This caused a few of the larger folks to focus on me in an attempt to physically stop me from doing journalism.

“ Fake news fake news ”, the crowd screamed at me.

A few folks even turned to that old chestnut of “ Go Home Nigger “ to impede my enthusiasm.

Dodging and running I managed to remain unmolested and got some more photography done.

The cops on the scene were charmingly uninterested in protecting me from these hefty fascists.

As the protest faded out there were a few dust ups and assaults resulting in several arrests with a much larger police and fire department presence as a result. A woman named Berlinda Nibo was assaulted and threatened but was eventually saved by a few good folks in the crowd. You can call 213 833-3750 to speak to Los Angeles detectives if you have any info on this hate crime.

Even though the assault on the capitol was an absolute failure, there are however, rumblings of some sort of aggressive action to be taken on January 17th.

So, if you want to disabuse yourself of any urge to feel that the worst cluster schtup of the Trump Show has already happened …...

….... then please check out this Boogaloo Boy brand spanking new Statement of Purpose :

This describes the groups new rules for a march on state capitols on January 17th, 2021.

1: We will make it very clear during the time leading up to and during the briefing before the demonstrations that if ANYBODY tries to advance into the buildings or initiates a confrontation, they will be acting rogue, uninvolved with our demonstration and are immediately responsible for anything that they do. We will not be providing aid or assistance to anybody that tries to mimic the actions from the 6th.

3: Counter-protestors have the right to be on site just as much as we do. We will keep our distance and we will not engage. Scheduled speakers will speak and all forms of order will proceed as previously planned.

4: Any weapons on site during the protest will be pointed in a safe direction or holstered. We anticipate and expect no need to draw our weapon for any reason. As such, they will be displayed only. It is requested that any weapon brought to any premises be unchambered and the safety engaged.

5: The scheduled events will start at noon local time and end at approximately 3:30PM local time. Loitering longer than this period of time is not recommended for the interest of safety and courtesy.

Resting assured may be somewhat premature.

Hopefully this era of national embarrassment will soon be over and we can give our attentions to the pandemic.

So enjoy these weird and spooky pictures of people in the throes of a mass hysterical demagogic myth.

There are 4 sets of photos.