Epilogue to an article on the forces of neoliberalism meddling in the LAUSD District 1 Special Election that will run in the LA Progressive. 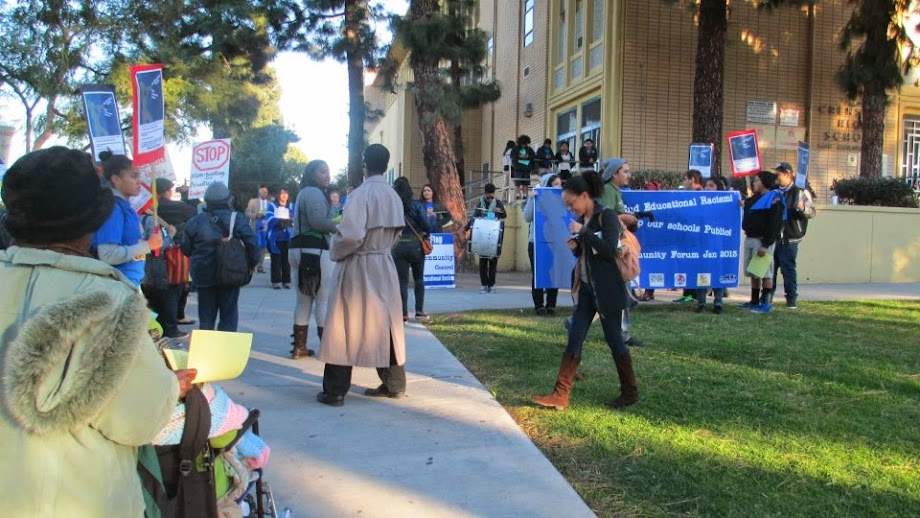 I have a piece coming out in the LA Progressive about the District 1 Special Election. They said it should run tonight or tomorrow. In it I endorse Sherlett Hendy Newbill and I also lend my political support to the other three educators in the race. Moreover, I address the three opportunists who are being financed by the billionaire privatizers and their Nonprofit Industrial Complex (NPIC). The privatizers are crafty. They're running three candidates simultaneously, without letting on that they're all being backed by the same organizations.

Here are some new facts that I didn't know when I wrote the article, but may be of use.

Regarding the Alex Johnson Campaign an ally sent me the following (I'm keeping them anonymous for now):

Curious why no one is mentioning how the same brigade that was pushing for an election is now pushing for Alex Johnson - their Facebook page has even morphed from demanding an election to exclusively covering the Johnson campaign: https://www.facebook.com/EmpowerDistrict1

Bear in mind that it was the usual NPIC suspects who pushed for the Special Election: Urban League, Inner City Struggle, United Way Greater Los Angeles, and Parent Revolution. Given what I've already uncovered about Johnson, It's no wonder that he's their candidate of choice, while Hayes is their backup candidate. Parent Revolution was an early backer of Hayes, but has since shifted to the frontrunner, Johnson.

However, don't think that Reality TV's Omarosa Manigault isn't also in their circle. I know many of you have had the unpleasant experience of coming across the California Charter Schools Association's (CCSA) K. W. Tulloss at various events. He works for the CCSA's Families That Can division. He also works for FBI snitch and corporate charter school cash cow Al Sharpton. I was looking up some information on him and came across this quote in the Los Angeles Wave:

Tulloss also brought reality show personality Omarosa Manigault into the fold, making her one of his assistant ministers. [emphasis mine]

When Tulloss spoke before the school board and the media Tuesday he never once identified himself as a paid organizer of the California Charter School Association. Instead he identified himself as the president of National Action Network, with popular black activist Najee Ali standing beside him. Using civil rights groups like NAN-LA to provide a black face for their corporate agenda is a textbook tactic of the privatization forces. It allows them to wrap their agenda, which is not in the best interest of students or communities of color, in the language and image of the civil rights movement.

The sums of money the neoliberal corporate school privatizers are throwing into this race have already outpaced anything the community can keep up with. All we have is truth to speak to their power!

Robert D. Skeels is a social justice writer, public education advocate, and immigrant rights activist. He lives, works, writes, and organizes in Los Angeles with his wife and cats. Robert is a U.S. Navy Veteran, and a proud member of Veterans for Peace. He attended Glendale Community College and graduated from the University of California at Los Angeles (UCLA) with a BA in Classical Civilization. Robert is a committed member of CEJ, PESJA, SCIC, and the Trinational Coalition To Defend Public Education. A student of Liberation Theology and Paulo Freire's work, he devotes much time towards volunteer work for 12 step, church, and homeless advocacy. Robert’s articles and essays have appeared in publications including Schools Matter, CounterPunch, Dissident Voice, Daily Censored, Echo Park Patch, K12NN, LA Progressive, and The Los Angeles Daily News. In 2013 Robert ran for the LAUSD School Board against a billionaire funded corporate reform candidate, finishing second in a field of five, with over 5,200 votes.